Ok it’s 2:00pm and because of a series of events… If we have to put a label on it lets call it ‘laziness’ my schedule to get out and enjoy a write about the morning coffee didn’t happen.

Ok well, it did although the story is one of joy and shame, choose which one you are to enjoy but know that it will reveal something about the inner workings of your heart and soul! So you know, choose wisely.

I went back to Roastery Coffee House and this time I was accompanied by my lovely other half! Remember how I told you that I would swagger in there like I have always known the place and when she thoroughly enjoys the experience and the coffee I would sit back and just soak up the adulation as us guys are just so damned good at doing!

So she did, and I did and then we did!! The other reason was well it’s a little embarrassing (but serves as a warning they don’t accept International Credit/ Debit Cards) for they machine doesn’t accept the cards. If you try a swift harsh and unforgiving refusal waits for you.  Also at that point in time I found out I didn’t have any none Australian cash (yes a grown man forgot something as simple as local money) so I promised to return the next day, offering my right shoe as a guarantee (seriously who walks around with only one shoe so you know, it’s as solid as gold really) and the wonderful manager trusted in the faith of humankind and let me return the next day to well square my debt. Which I did and all is well. He even took a photo of me drinking coffee, during which I think I started to sweat.. I much prefer to be on the other side of the camera!

However this meant that the morning was gone, and so 3:00pm came around like a rude person and I though (crap I need to get out and try coffee shop number 2!) so to the recommendations I go and I see Heart Cup Coffee. I’m on the fence as to whether I should go but then on the menu, I see they also serve beer.

Basically if you ever want to trap an Australian in any cage just throw a six pack of beer in there.. We will know perfectly well it’s a trap, we will know this means someone wants to do us harm. However we won’t care because there is free beer for the taking and as that Australian looks deep into his soul he/she knows that he/she has done allot worse for beer before and so well.. Besides if I end up trapped (which is an assured outcome) I will be trapped, and this is the important thing, “with a six pack of beer”. So, all in all, that’s not really that bad. 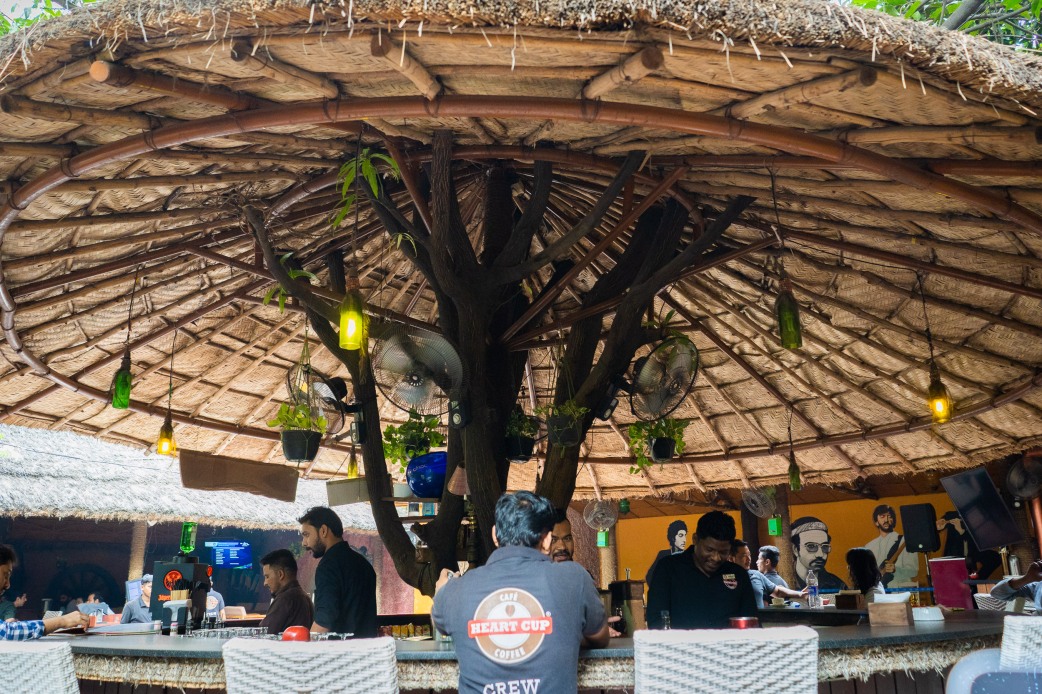 Stepping into the place I get the feel that this is a pub / beer garden who also sells coffee. At night this place would have a wonderful ambiance to it but I’m not here to talk about pubs if I decided too the next day write up would be insultingly brief and a tad.. well.

I think I sang that song with the bit I will always love you…. which is strange because they don’t have karaoke, or a microphone.

Then things turned ugly… god my head hurts, it’s like my brain wants to escape the skull prison by smashing itself against the walls! I don’t know how I’m going to keep going!

So yes let’s stick with Coffee..

Looking around the place a cat walks past me and instantly I feel the mistrust radiating from the little beast. It looks at me with that look all cats give you which is this “do you have anything for me? Food, water? No well then there is nothing in this relationship that interests me so consider yourself hated.. Oh and if I were bigger than you I would eat you in a heart beat”

I say hello in a really nice and caring way and well I’m pretty sure the cat return a crisp ‘piss off!’ before leaving.

Appart from the cat I think the place has a really cool atmosphere and I’m glad that I came here in the afternoon to enjoy this. Random background music is playing which is and the up beat susurration of conversation can be heard mixed with the occasional burst of laughter, possibly from someone saying something funny, or possibly because they are raving mad. Can I be bothered to find out? No… no I can’t

I order a standard latte, the options are few fewer that’s the Roastery Coffee house and that’s neither good or bad, so I order the standard latte although they have a speciality house drinks with honey and creams and a bonus love handle.

The coffee arrives and it’s in a glass mug, yeah not my favorite but strangely enough the glass mug really suits a place like this. It’s almost as if they are saying “we know you want beer but hey just hold this like a beer mug and have a coffee, it’s a win win!” So I do, and the question has to be asked.. Do I feel like a winner?

There’s not allot you can say about the glass.. I could possibly ask if the glass mug was made from I don’t know, recycled glass.. It feels smooth.. but that’s glass.. If there are any jagged edges well you will really know about it.. so yeah it’s glass.

So I taste the coffee and it’s really nice as well! Again I’m useless at describing words to depict you the taste..Maybe one day I will find some Artifical Intelligent service that will do this for me, and if that day ever comes watch out! But let me say this. It was really nice coffee, strong and bold and for some reason a hint of Smokey?? I don’t know try it yourself and let me know if you taste the smokiness..

So this place.. I’m really glad I came here.. this is a great place to just chill with your friends and maybe if the mood strikes you stand up on the bar and sing out loud how much you will always love YouuuuuUUUUUUuUUUUuUUuUUuuuuuuuEeeeeeeeeooooooooooooooooo

Or relax after a long day of putting up with that stupid person in [insert department name here] after they bloody well sent the email asking for [insert request that is actually their responsibility] and you have to reply with a nice response even though you would prefer to just press down the caps lock and let fly!

Come here instead, order a coffee that dreams of being a beer, ignore the stupid cat that only wants food and just relax 🙂